Things are certainly looking up for the World Surf League! While other sports governing bodies like FIFA and the IOC plumb new depths, the WSL soar, not an FBI racketeering indictment nor state-sponsored doping scandal anywhere near!

And with the thrilling climax of the season shortly upon us at the Billabong Pipemasters there are no less than six men in the running for a World Title.

Who are you hoping for? Us? DeSouz obviously!

Elsewhere, the SurferPoll just went off without anyone fucking (or birding!) them on stage. What a difference a year makes.

They have also made a groovy ad called ‘Chaos Theory: Can’t Script This.’

The loose premise is cyclogenesis: the birth of low pressure systems, and the subsequent swells they generate. It’s actually really rather good.

Just a slight word of caution. In 1990 MC Hammer released the similarly entitled ‘Can’t Touch This’, on his way to global fame and amassing a $33million fortune via album sales of ‘Please Hammer Dont Hurt Em’

Later, known simply as ‘Hammer’ he would become an ordained Christian preacher with a TV show called ‘Praise the Lord’ , and filed for bankruptcy 1996, $13 million in debt. 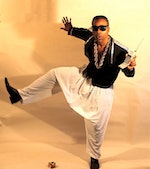