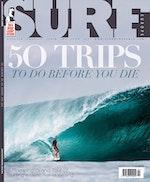 Dear Reader, I’m just gonna come straight out and say this…
You are going to die.
Probably not today, hopefully not tomorrow, but at some point, you’ll be in for the eternal dirt hold-down. The wooden box wipe-out.
Some people say ‘the only real thing of value we leave behind when we’re gone is our children’. But I’m not sure. I think there’s also a case to be made for ‘stories of stupid shit we did on holiday’. And thus we curated a selection.
You see, I’ve realised I have issues with Travel Issues. With guide-style go there pieces. Nothing wrong with them… more like too much right with them.
So we tried and tried oh how we tried not to come up with something a lot like, “The main season is May to September BUT YOU CAN GET REALLY FUN WAVES OUT OF SEASON WITH NO CROWDS…” and of course, “Take your regular shortboard plus something shorter and wider for small days PLUS A PINTAIL STEP UP TO HANDLE THE JUICE…”
So in putting together this ‘50 Surf Trips To Do Before You Die’ collection we decided to go for more of an anecdotal feel where possible, rather than yet another of those nauseatingly upbeat info type schmoozes. Some favourite stories, sketches, memories both pin sharp and blurred from various trips by various folk and recounted them to incite a bit of gritty – yeah OK at times shitty – realism. (Although we did bung in a 5 point scoring system, from 0 (pants) to 10 (amazing) to make them sort of semi-useful ish…)
The idea isn’t so much to tell you what wax you need to take, or how much bamboo fins might be at the local surf shop at a chosen location, more along the lines of pricking your interest with some real tales from the real road.
Pro surfers in jail, amateur surfers who should be, journos posing as professional breast inspectors, body swerving pool shark hookers in West Africa, domestic violence in Scotland, public violence in Central America, that kinda thing. Tripping out in the Namib desert, robbed by machete weilding Bajan crackheads, robbed, pistol whipped and bunghole fingered by Mexican banditos, guilt tripped by Californian hobos. Chinese nightclub toilet willy inspectors with bad breath, landmines in Mozambique, Easter Island horse eaters, yeah OK maybe it’s misfortune porn, but it’s empowering, and hardly any animals were harmed.
As for the 50, I’m up around the 28 mark currently… I have no major plans for any of the other 22 in my immediate future, although who knows? Bucket listing is all the rage they tell me. And still much more fun than bucket kicking. – PE

BACK! DIFFERENT! FEWER… BUT MORE! With weightier travel features and spicier reportage to send you to far flung wave drenched corners of the globe without having to leave your couch, with more in-depth, honest profiling of the characters, freaks and fruits that make up planet surf – and of course all the customary state of the art photography – the fresh new Surf Europe format of four issues per year will see your favourite surf mag slide authoritatively somewhere between coffee table and coffee enema.

At home this winter and visibly in his element , France's Joan Duru revels in the thumping surf between Capbreton and Seignosse.

Lowey went and grabbed this absolute beast of beasts of a backhand tube at the Cliffs. All we had to do write his name and...

Video highlights from this year's Nixon Surf Challenge in Kamchatka.

At home this winter and visibly in his element , France's Joan Duru revels in the thumping surf between Capbreton and Seignosse.

Lowey went and grabbed this absolute beast of beasts of a backhand tube at the Cliffs. All we had to do write his name and...

Video highlights from this year's Nixon Surf Challenge in Kamchatka.

10 Indo waves to surf before you die

And more importantly of these ten how many have you not ripped?

10 Indo waves to surf before you die

SANUK HOW TO's: Wipe With One

If less is more, then wiping your bum with just one piece of paper is about as close as humankind gets to perfection...

SANUK HOW TO's: Wipe With One