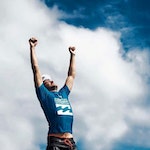 Yesterday Jeremy Flores won the Billabong Tahiti Pro, and in doing so became the first European to win a world tour event since . . . erm . . . Jeremy Flores, who won the Pipe Masters in 2010.

Jeremy Flores? They wouldn’t be the same one, perchance? The very same, now I come to think of it. After a hiatus of several years, the real Jeremy Flores appears to have returned. A little older, a little wiser, sporting some unusual headgear, but in all essential aspects unchanged.

One such essential aspect would be his aptitude for barrel-riding; another would be his affinity with the island of Tahiti, and with its premier reef break in particular. Flores beat Gabriel Medina in the final, surfing — as he had been all event — in a helmet so as not to aggravate head-injuries he sustained in Indo two months ago (his decision to partake at all was a last-minute one, contingent upon conditions not being overly large). I think this makes him also the first helmeted surfer to win a world tour event since Tom Carroll won Pipe in ’91. As in his quarter-final against Slater, it was Jeremy who seemed more in tune with the rhythms of the ocean — or who surfed the smarter heat, or enjoyed the better luck, depending on one’s particular philosophical bent. The final hinged on a single wave, a 9.87 in the opening minutes, caught moments after Medina had handed him priority.

Elsewhere, Toledo delivered the day’s most bizarre performance, becoming the first surfer to record a 0.0 heat total since Coco Ho at Margarets earlier this year — and the first male surfer since God-knows-who (anyone?). He failed to catch a single wave in his Round 5 heat with Italo Ferreira, who was meanwhile able to catch seven and post a healthy 15 before the waves switched off with ten minutes to go. Toledo remains well-positioned in the title race, of course, but the manner of his exit will surely strike a severe blow to his confidence. A win at Trestles would now be a remarkable, audacious achievement — and would underline his flaws almost comically.

A wee teaser to tickle the taste buds -- or offend them to the point of nausea, depending on your disposition

A wee teaser to tickle the taste buds -- or offend them to the point of nausea, depending on your disposition

How in God's name did CJ make it out of this one?