NO.6: MAKING LITTLE SCALE THINGYS ON BIG WAVE SHOTS
Now who’s to say what’s right and what’s wrong? After all, this is 2013, and the boundaries are blurry at best. It’s like the moral arbiters of days gone by have all been caught fiddling their expenses and have run off with eleventeen-year-olds to snort lines of EPO of Lance’s ballbag. But! Some things still give the impression of being not quite right, and one them might be making scales based on the surfer’s height to show how big big waves are. There’s nothing actually wrong with it of course, it’s not that bay in Japan where the dolphins are all getting sliced, but even still… really? This one came from a UK surf website, who it seems are repeat offenders.

No. 5 BRAD GERLACH
Gerr was kind of like Blur for me. I couldn’t like them at the time, but after their prime was kinda over you find yourself warming with a nostalgic ‘ah yes’ and regarding their body of work with more fondness and respect than you ever had at the time. He’s done a lot, he’s a funny dude, he’s aged like Ben Button, he can pull off painted fingernail looks and other fruity stuff you secretly wished you could if it definitely got you laid. Here’s a baz from Australia’s excellent Coastalwatch website from last weekend showing why Gerr is still cool.

Hmmm. Britart never did it for me. Damien Hirst and Tracey Emin generally made me want to little cat sicks in my mouth or shout at the TV and yearn for Patrick Heron. Their one redeeming feature is that they angered the Daily Mail. Steds on the other hand is cool. He’s a beautiful man, he rips better than you’d probably think. He has achieved much in the arena of skirt. Much. Even though I’ve never dug Hirst, the truth is if he wanted to pick me up in his helicopter and fly me to his billionaire compound and make a 5 million pound potato print out of one of my pubes, I’d be delighted. Principals are so last year. This is an oldie but posted by Stedz this week… Not following him? you should @instedwesmile No 3. BEING A PRO SURFER STILL SUCKS It can’t be a weekly round up without Alana Blanchard, who recent studies have shown actually owns the internet. This week it was discovered she features in the upcoming Sports Illustrated Swimsuit Edition. One quote, “It’s cool, cause I got to design my own bikinis and I like them really small.” I also like the two comments taken from our Facebook page.

France had some wind on Monday, as seen here in a Hossegor beach carpark.  The banks looked real good… about 200 metres inland. 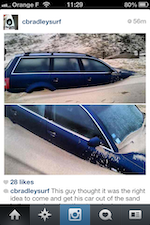 A glimpse back at those ocean gymnasts who dressed up as popsters for our Interview issue.

How did your yesterday go? Probably not this well...

A glimpse back at those ocean gymnasts who dressed up as popsters for our Interview issue.

How did your yesterday go? Probably not this well...

LATEST ISSUE: YOU ARE TRIPPING

LATEST ISSUE: YOU ARE TRIPPING

Yes it is the weekly Surf Burp. It's like a pro surfer throwing a internet poo in your face, except less fun.