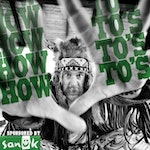 Think Donny’s soul arch bottom swings are all form and no function? Think again. I once saw him come in after a sesh and use the sharp inside edge of his single fin to shave the hair of boar pre cooking…

1. One dead pig/boar. If it’s a live pig you’ve caught in one of your wild pig traps, you’ll need to slit its throat open and then stab it in the heart/slice the carotid artery. Then saw its head and trotters off and remove the innards. When we did it (I say ‘we’, but I climbed a tree in fear and watched), a woman known as Grandma Crack said/croaked, “You gotta cut off the feet so the meat doesn’t spoil”. Who knew an pension age drug dealer would be so up on meat hygiene?

Otherwise, you should be able to order a nice suckling pig from your local butcher’s for around £100, you wuss.

2. Firewood. Use untreated (as in branches of), preferably hardwood.

DIG Dig a pit in the sand at the top of the beach, above the high tide mark, first thing in the morning, around 1.5m long by 1m wide and 1m deep.

BURN Build a large fire in your pit with plenty of dry kindling at the bottom, covered with larger branches, enough for a good couple of hours of fire. Place several large pebbles on top, each about the size of a large fist. Light the fire and keep it going until your wood has burned away and your rocks are red hot in the embers.

VEG OUT Chuck on your vegetation. Traditionally, Hawaiians used banana and ti leaves, but let’s assume these aren’t growing near your local break. What might be growing though are wild cabbage, sea kale, nettles, dock leaves, (all common around British Isles coasts) or any stemmed, succulent leaf that won’t impart a nasty taste. You can use corn leaves and husks, watercress, lettuce, even chuck in some bananas you bought from Tesco for a more authentic imu flavour.

COVER Fully cover the rocks at the bottom of the pit with leaves, place in your pig, putting a couple of rocks with leaves inside the carcass (using your shovel, they’re red hot), completely cover with leaves and vegetation again, cover that with sheet of plastic or preferably, a wet burlap sack (extra moisture for steam), then cover with sand.

By now it’s mid morning, you’re all warmed up from digging and making fire, the sun has come out and the tide’s dropping nicely. Later that day, after a couple of spiritually enriching surf sessions, carefully uncover your imu before dusk (at least 6-8 hours cooking, depending on size), you and your entire tribe will enjoy deliciously tender pork cooked just as King Kamehameha would have liked it.

Will somebody please just piss on me?

Will somebody please just piss on me?