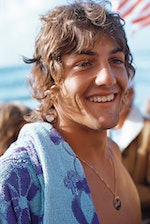 THE DANDY OF DEEP

Shaun Tomson spells his last name Tomson not Thompson and it has confused the internet for decades. Shaun Thompson is an African American fitness guru. Shaun Tomson is one of history’s best surfers, 9th best according to this magazine, and maybe “the ultimate pro.”

He was raised in Durban, South Africa by a land baron father and won every surf contest in his native land. He went to Hawaii in 1975 and started bustin’ down the door. He won the Hang Ten Pro Championships and made over $10,000. $10,000! His tube steez was exceptional. He could ride the foamball like a cowboy. He could get very pitted. He could bob and weave through barrels previously seen as “unmakeable” because he would ride with a very wide stance and pump. His tube steez made him very envied by especially Rabbit Bartholemew who also was bustin’ down the door at this same time.

Unlike Shaun, Rabbit went home and told everyone that he was better than all the Hawaiians. Uh oh! Eddie Rothman hates the phrase “Bustin’ down the door.” He says, “They didn’t bust down shit.” He also says that Shaun Tomson is….well is… well is something that is probably not true.

But Shaun Tomson did have a reputation for being a dandy. He did not camp out on surf trips and he did not fix his own dings. He carried himself with a patrician air and was handsome and modeled for Calvin Klein. Surf journalist Phil Jarratt wrote that, “Tomson strode in like the Great Gatsby.” yeah!

He competed for fourteen years and had twelve world tour wins before retiring. He then went on to found Instinct clothing and later worked for Patagonia and O’Neill. He recently released Krazy Kreatures – under my Surfboard!, a collection of illustrated rhymes for children.