Surfing’s original king of DIy and the man responsible for two of the biggest quantum leaps in surfing performance and board design. Back before MP was the heavily medicated schizophrenic balloon that he became in middle age, his ‘troubled’ mind had revolutionised surfing with hitherto unthinkable creativity. The boards he learned to surf on were in fact discarded banged up longboards which he and his brother shaved down into shorties. This was before shorties were even a thing, but MP could see a different way to ride waves and knew the type of board that would get him there. The images of him laying down serious gaffs and splitting Kirra grinders in the seminal 1972 surf film, Morning of The Earth remains some of the most accomplished single fin riding in history. His new style of fast, top to bottom surfing was the genesis of where performance has gone today.

He had competitive success too, winning Australian titles in 1972 and 1974, along with his famous victory at Bells in 1973 in which he blew competition away with a radical new board and a jitterbugging face-carve exhibition that made light of a new judging criteria. But he was also a heavy drug user and eventually his sanity gave way. The low point came after he led police on an infamous car chase and ended up doing a year in Queensland’s toughest prison, Boggo Road. He was later diagnosed with schizophrenia and taken to a mental institute where he was given electroshock therapy. Later he was placed on heavy medication, which played havoc with his metabolism and caused him to put on a stack of weight. But he remained an avid follower of surfing right up until his death of a heart attack, and even released a series of updated dingle fin designs prior to passing. 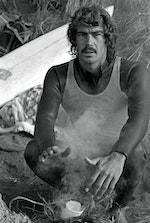