Excited about the 2014 Billabong Pro Tahiti? Not as excited as Ben Mondy was a few years back, when he was bromancing with Occ and Parko… until someone stole his happy. 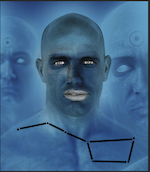 I was in Tahiti staying with Parko and Occy.

Apart from name dropping, I was there for the Billabong Pro.

However that year had been dogged by a small south swell and a high pressure system that wouldn’t budge. The infamous Chopes was day in day out, like a dwarf on ecstasy, three foot and friendly.

In the Parkinson household though, each morning the boys were in a routine of getting up for the super early, way before sunrise. It would be dark and first you’d hear first the rattle of a kettle soon followed by Occy padding up to the stereo.

Then you’d hear him sing. The same song. Every morning.

Barry White’s deep grooves would be overlaid with Occy’s nasally enthusiastic pitch “Can’t get enough of your love baby.” That would be the signal to make a move towards the ocean.

I’d follow and watch as Parko and his trainer would sort of be dancing on the way out to the boat, Occy singing still and always with the sun just coming up and the felt green mountains behind us.

You know when you look back at a time when everything seemed to be in the right place, at the right time? Well that was happening to me.

For the last few years Parko, along with Bruce and Andy, had been surfing a wave on the small south swells, only 500 yards up from Chopes. There was no real defined channel, and no boat access from the lagoon, so you could only really check it from behind.

And from behind it looked like a closeout, onto dry reef.

They’d actually only discovered it fishing, chasing some giant trevallys into the inside and scoped a few lefts that wedged off a longer finger of coral.

There was just enough of an exit point, and for the last few comps, when Chopes was three foot and crowded, they’d been up the reef, just out of sight of the world’s best surfers and mass gathered surf media, getting six foot nugs on their own.

They had a pact to only surf it for the dawn session and not to tell anyone. This year though with the swell perfect for the wave (named Saran Wraps by Bruce, the water being as clear as the cling film brand) day in day out, the sessions had been getting longer and suspicions had been aroused in the Chopes fishbowl.

One morning Saran’s was absolutely cooking, solid drainers and just us out. I was being called into six foot tubes by Occy and Parko, and had already penned the email back to the boys in my head gloating in my good fortune.

Then we heard a jetski, churning up from Chopes. I could just see the glint off sun off a bald head and the flicker of a Quiksilver logo on the ski.

Kelly Slater rocked up solo with no boards and started watching the session.

For me, a jetski driven by Darth Vader and co piloted by Piers Morgan, would have been more welcome.

This was my time, with my new mates. I sensed things were about to change. I swear I could hear the Star Wars Stormtrooper death knell soundtrack.

“What’s it like?” He asked Parko, with a grin. “No good mate,” Parko replied deadpan. We knew it was over.

20 minutes later Slater returned, with a board and a crew. As soon as slid into the first crystal clear tube, no hands, and was blasted out into the Tahitian sun by the spit, the word was out.

Later that arvo, an all time session with half of the top 44 went down at Saran Wraps.

The next pre dawn morning I heard the kettle and then the stereo. Occ was still singing “Can’t get enough of your love baby” the sun was still about to rise and the mountains were felt still a rapturous felt green.

Parko was dancing to the boat. And yet the secret was out. A special time had finished.

Sure I still had names to drop, and yes, it wasn’t even my secret.

But it was over.

My life has gone steadily downhill ever since.

Results from Round 1 at Trestles.

Still struggling to find that oh so special 'magic board' you hear so much about in surfing folklore? Read on!

Results from Round 1 at Trestles.

Still struggling to find that oh so special 'magic board' you hear so much about in surfing folklore? Read on!

The 11-time champ is officially back in the business of selling clothes.