There’s a shaky yet at times tenable theory concerning swell forecasting, which states the level of hype in the lead-up and the magnitude of the swell event itself exhibit an inversely proportional relationship.

Or to put that another way, the more folk talk the waves up, the less likely they are to be life-changing good on the day.

Indeed, there had been an awful lot of build-up chat about the swell that launched the MEO Rip Curl Pro Portugal in spectacular fashion at Supertubos today. As far back as last Sunday morning, while many were just rubbing the Quik Pro France finals day festivities out the corners of their eyes, there began the genesis of a rumor of a booming swell in the mail for Portugal. Early in the week, advance party sentries were reporting epic sandbars installed at Supertubos, with wind forecasts looking highly cooperative. 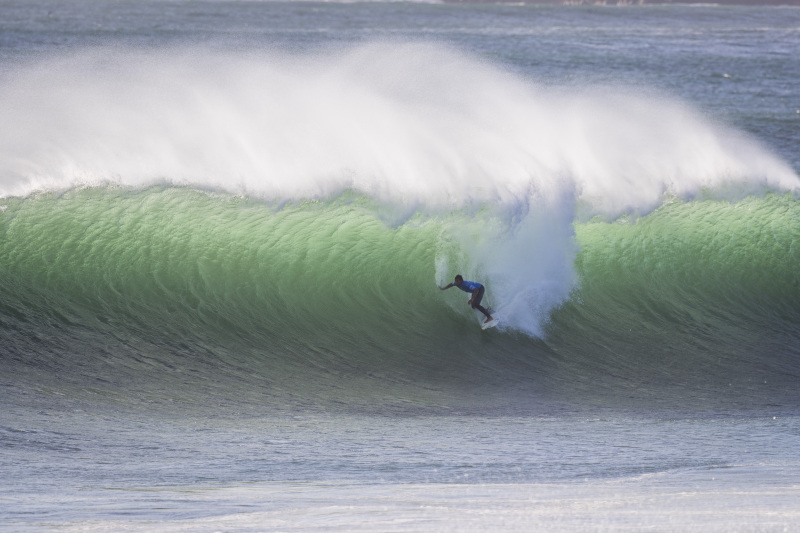 Florence, who advanced at a canter over Mason Ho and Kanoa Igarashi only stood up four times today, posting a heat total of 11.67 (versus his 2017 average of 16.53). “I’m super stoked to be back here and for the waves to be pumping like this, it’s amazing,” Florence said. “It’s got a little Off-The- Wall feel to it, like it’s a little bit unpredictable and you see those big ones coming in and you never know if you’re going to make it or not.”

Surf fans with a fancy for statistics might note that Igarashi posted a combined heat total score of 0.50 points, while Florence’s own relatively meek points haul was greater than the sum of all of Heat 1’s three surfers’ (Julian Wilson, Leonardo Fioravanti, Caio Ibelli) heat totals. Still, if nothing else, the reigning World Champ will come into Round Three with plenty of energy in the tank, having hardly exerted himself on an otherwise strenuous day.

Smith, whose detractors are quick to point out a perceived heavy-water Achilles heel, won through against a similar lack of genuine opposition with his adversaries, Vasco Ribeiro and Italo Ferreira barely posting five points between them. “At this stage it’s head-down, no looking back and a Round One win is just as important as a win in the Final,” Smith said. “The conditions are extremely tough out there, it’s huge. I’m very relaxed but I feel like this result in France killed me. I have nothing to lose at this point, if I finish the year second it’s a great year, if I win the World Title even better, so everything to gain.”

Meanwhile, Owen Wright and Filipe Toledo’s 2017 World Title chances — slim as they were — were extinguished today via a Round Two losses to Ribeiro and Fioravanti, respectively. Wildcard Ribeiro, who posted the day’s highest wave score of 9.27, earning the day’s loudest cheer, managed to eliminate Wright — World No. 4 — despite having a back-up score of 1.83. An emotional return to Pipeline for Wright, the wave that inflicted career-threatening injury on him two years ago, will be just another compelling story in a historic season for professional surfing.

The overall theme for today was very much survival, making the most of hospitable openings where they presented, and avoiding landing lips at all costs. Josh Kerr, Michel Bourez and Jadson Andre drew shrieks with major closeout sendage, while Bourez finished his heat, a breathless win over Toledo and Andre by getting washed back into the beach, having being forced to abort a paddle-out attempt after a board change. Mick Fanning, who nailed the highest heat total of 15.50, was back on the beach after a board change of his own and with seven minutes to go, publicly contemplated not attempting a return to the lineup. In the end, he didn’t manage to get there, despite trying. The afternoon’s standard caught inside, pre-duckdive prep being to turn 180 and the paddle back toward shore to escape the initial explosion, was testament to just how heavy things were.

While conditions today were the bigger than anything seen at this event for the past four years, one particular similarity to last year’s edition is particularly notable; John Florence could be crowned World Champion here in Portugal with a win, becoming the first surfer to successfully defend a World Title since Slater in 2011.

But as yet, with a great forecast on hand for the coming days we’re a whole lot of surfing — and likely dramatic incident — away from that.

Sand and salt are all good, but they can seriously damage your surf kit

25-year-old Charlie Fry 'punched it in the face'

Yesterday at Nazare by Drone

Yesterday at Nazare by Drone

6 of the Best: Power Surfers

6 of the Best: Power Surfers