Paul (not the one shipwrecked at St Paul’s Bay in Malta, the other one) Evans writes:
I found these video clips in the ‘Proving Grounds.’ They are proving quite difficult to fit in the space for content on our site, but hey ho, ho ho.

Today, many folk are celebrating the birth of Jesus of Nazareth, I. N. R. I. Others are celebrating the arrival of the bearded, rotund Scandinavian pagan god of consumer capitalism, Santa Claus, or Father Christmas in English English, should you find the New World vernacular unpalatable.

Without meaning to slash on the embers of the Jesus nativity fable overly, today many scholars and scientists actually believe that if there was a Jesus, he would, according to the details in the Christian’s own story, actually have been born in late Feb/early March. The reason for this is that the star alleged to have guided the Three Wise Men is actually visible in the Middle Eastern night sky in late Feb/early March. Furthermore, it is highly unlikely that shepherds were out in the fields at night in December (‘While shepherds watch their flocks at night…’), watching over lambs that haven’t been born yet. In the Middle East, just like everywhere else in the northern hemisphere, sheep lamb in the spring, not in December. But enough of that.

I landed at Heathrow Terminal 3 yesterday after a long yet mostly painless journey back from Hawaii. I bought The Times. Inside, I read an article about heroin in Glasgow being laced with anthrax. Syed Ahmed, consultant in public health medicine was quoted as saying, “I urge all drug injecting heroin users to be extremely alert.” Hmmmm. Couple of things struck me as odd 1) Would a consultant in public health not first urge the public to avoid injecting heroin if at all possible, and 2) Be alert?!? Not being an expert, but having seen Trainspotting and read William S Burroughs’ Junky twice, I thought you kind of fall asleep for a couple of days on a dirty mattress somewhere in an Easterhouse (soz Jesus, but descendants of the Scots/Picts tribes actually named one of the most depraved areas of Glasgow after the ceremony that marks your death) squat in a fuzzy haze. Not usually something associated with being alert, being high on smack. Still, for those Glasgow-based drug injecting heroin users that read my blog, do us a favour and stay alert guys, yeah?

I woke up this morning among the woodlands of Crowthorne, Berks and meditated watching my mum’s silent, windless, snow-shrouded back garden through the patio doors. Just in case you’re unfamiliar with Crowthorne, it’s the village where, in the early 19th century, The Duke of Wellington came riding through the forest, saw a forester’s pub in the middle nowhere and exclaimed, “Who’d have a thought it, an inn, here!” In case you are unfamiliar with the Duke of Wellington, he’s one of the greatest military leaders in the history of the world, he who lead the British forces to victory against the French at the Battle of Vitoria in 1813, and again in 1815 crushed the French whilst commanding the allied army against Napoleon at the Battle of Waterloo. Fortunately, Britain and France are at peace now, allowing me to live there, surf their waves (badly), eat their croissants and breathe their air.

Whatever you get up to today, have a good one. Happy Christmas! 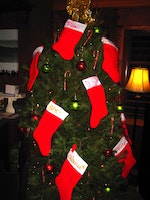 Christmas tree at the Wolcom Pipe house, Hawaii. Dingo Morrison woke up on Xmas morn with welts on the palm of his  right hand. Not from being nailed to a wooden cross at Golgotha Heights by a Roman soldier, but from the friction of Damien Hobgood’s leash. Ouch! Photo: Magnum/P.E.

Paul ‘a abdul’ Evans writes: Final day at the Pipeline. 5am optimism was high about a surge in the swell, but the tropical dawn revealed the...

Paul ‘a abdul’ Evans writes: Final day at the Pipeline. 5am optimism was high about a surge in the swell, but the tropical dawn revealed the...